Collective Intelligence to Solve the MegaCrisis 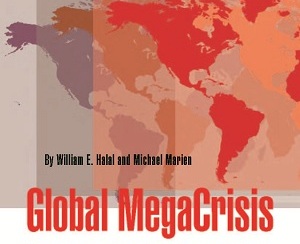 Collective Intelligence to Solve the MegaCrisis

Note: This article is a summary of our three-part study covered in the blogs of  April 11,  April 25  and May 9.

The coronavirus is a stark reminder of the devastating damage that could be inflicted by cyberattacks, superbugs, freak weather and a variety of other threats. These wild cards are in addition to the existential challenge posed by climate change, gross inequality, financial meltdowns, autocratic governments, terrorism and other massive problems collectively called the Global MegaCrisis.

I sense the world is so frightened by recent disasters that people are searching for new solutions. They seem ready to break from the past that is no longer working. Climate change is starting to bite, for instance, and there is a growing consensus that the status quo is no longer sustainable.

I have studied this dilemma for decades, and I think it can be best understood as a transition to the next stage of social evolution. The Knowledge Age that dominated the last two decades is fading into the past as AI automates knowledge, forcing us to move beyond knowledge and develop a global consciousness able to resolve the MegaCrisis.

Yes, I know this is a bold claim, but that is how the shift to a world of knowledge looked 40 years ago. When computers filled rooms, I recall telling people that we were entering a world of personal computers. The typical response was “Why would anyone want a personal computer?”

Just so, today’s post-factual era illustrates how the smart phone, social media, and autocrats like Trump have moved public attention beyond knowledge and into a world of values, emotions and beliefs. Now the challenge is to use these new powers of social media to shape a global consciousness, or face disaster. While this may seem impossible, that is always the case before major upheavals. Nobody thought the USSR would collapse up until its very end.

In fact, the Business Roundtable’s recent announcement that business should move beyond the bottom line to include the interests of all stakeholders is revolutionary. It has now been promulgated by the World Economic Forum and other influential bodies. The gravity of this change is such that business is now being told to help resolve the climate crisis. Larry Fink, who runs the biggest investment firm in the world (Black Rock), directed the companies he owns to help address climate costs in their operations; within days, many firms announced climate plans.

Toward a Global Consciousness

The governing ideas inherited from the industrial past are outdated and heading toward disaster. It is a collapse of today’s reigning “materialist” ideology of Capitalism, economic growth, money, power, self-interest, rationality, knowledge, etc. These values remain valid and useful, of course, but they are now badly limited. Prevailing practices in the US, as the most prominent example, are failing to address the climate crisis, low wage employee welfare, universal health care, women’s rights, political gridlock, aging infrastructure and other social issues that lie beyond sheer economics.

This could become a “Collapse of Capitalism” roughly equivalent to the “Collapse of Communism” in the 1990s, and it stems from the same fatal flaw – failure to adapt to a changing world. Communism could not meet the complex demands of the Information Revolution, and now Capitalism seems to be failing to adapt to a unified globe threatened by pandemics, climate change and the other threats making up the MegaCrisis.

The big question remaining is, “What should be the new vision, values, principles, and policies?” At the risk of appearing pedantic, I integrate what has been learned above and my forthcoming book, Beyond Knowledge, to outline five principles of what I consider “global consciousness.”

1. Treat the planet and all life forms as sacred. The Fermi Paradox notes that no other civilizations have been detected after decades of SETI searching. This rarity of life reminds us what a miracle plant Earth really is, and that we are responsible for its well-being.

2.Govern the world as a unified whole. Nations remain the major players in this global order, but they should be lightly governed by some type of global institution like the UN and other international bodies. Individuals should continue to be loyal to their nations and local institutions, but they should also accept their role as global citizens.

3. Collaborate with stakeholders to serve collective needs.  Free enterprise is the basis of society, and the good news is that business is on the verge of becoming cooperative. The Business Roundtable announcement that all stakeholders should be treated equally with investors seems an historic breakthrough. This move to a quasi-democratic form of enterprise could set a new standard for collaborative behavior and human values throughout modern societies. One of the benefits from a tragedy like this crisis may be a loss of faith in the status quo and an urge to cooperate. I see it everywhere, and it is a blessing in disguise emerging out of chaos.

4.Embrace diversity as an asset.  Rather than becoming a uniform pallid bureaucracy, a unified world should embrace the wondrous diversity of cultures and individuals. Working across such differences poses a challenge, naturally, but differences are also a source of new knowledge, talents and human energy.

5.Celebrate community.  Any society needs frequent opportunities to gather together in good spirit, enjoy differences and commonalities, and to simply celebrate the glory of life. The World Olympics Games, for instance, are special because they provide a rare feeling of global community. We could witness a flowering of celebratory events over the coming years to nourish the global soul.

This is only one small study, of course, but I hope it provokes thinking toward a widely held vision for planet Earth at a time of crisis. An historic change in consciousness is hardly done overnight, and the obstacles posed by the status quo are formidable. But the Information Revolution provides a powerful method for shaping consciousness by using the Internet and public media. Think of the explosion of ideas, hatred and forbidden desires released by billions of people blasting into loudspeakers like Facebook and Twitter. Anybody can use the media to shape public opinion instantly, for better or worse.

The task we face is to shape a unified consciousness out of this morass of differences to solve the global crises that loom ahead. Today’s threats to reason is challenging us to counter wrongheaded beliefs and to provide more attractive visions, such as the principles for global consciousness outlined here. I suggest the place to begin is by discussing these ideas as widely as possible, and to shape public opinion roughly along these lines.

A related version has been published in the Journal of Futures Research.