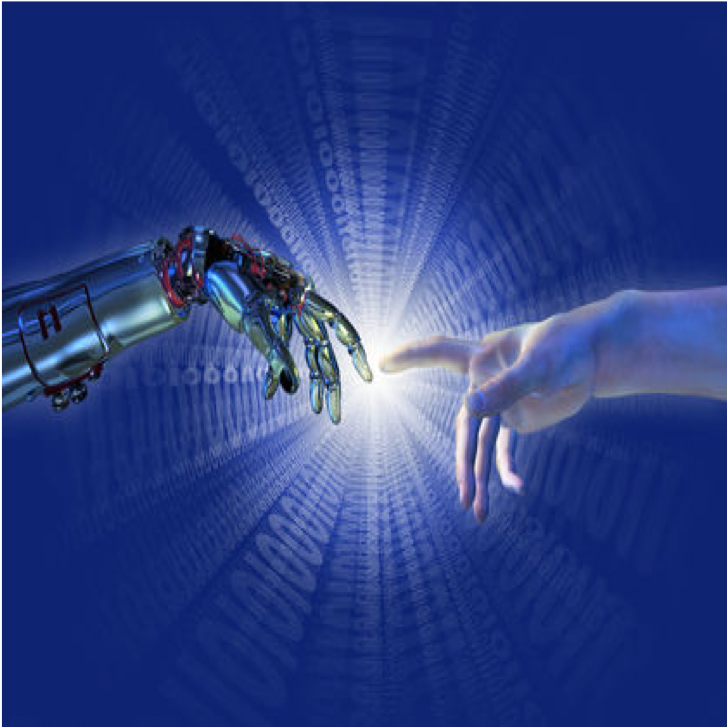 As Attractive and Elusive as the Holy Grail

Ever since Alan Turing defined the possibility of intelligent computers, the goal of creating Artificial Intelligence (AI) has proved as attractive and elusive as the Holy Grail. Computers have beaten chess masters, chatted with humans, guided robots and steered vehicles through city streets. Yet even children still outperform even the smartest machines. We do not fully understand the human mind well enough to develop good AI. In addition, a truly useful AI must deal with humans in real-world situations, be aware of the environment and make moral decisions. In this area, AI stills crawls.

But the marginal cost of applying AI is near zero, and a study from the Oxford Martin School suggests that nearly half of jobs could be automated in the next 25 years. Even intellectual jobs are being automated much the same way industrial automation did on the factory floor. One researcher said, “The work done by doctors, lawyers, and scientists could be done by computers.” Some people are thinking about an “AI-rmageddon,” in which artificial intelligence grows smarter than humans, takes control of the world, and subjugates our species.

IBM, Google, Microsoft, Facebook, DARPA and MIT continue to make gains in practical AI applications. Rather than try to make computer intelligence identical to humans, they focus on “weak AI,” smart machines that may not think like people yet are capable of replacing them in routine mental tasks. These special purpose AI systems are used in transportation, banks, hospitals, loan applications and in smartphones.  Andrew Ng, chief scientist at Baidu Research, called AI “the new electricity. Just as electricity transformed industry 100 years ago, AI will now do the same.”

Progress is also supported by governments. The Chinese Ministry of Industry and Information Technology has developed a five-year plan that targets the big-data industry. The plan calls for Chinese companies in the field to exceed 1 trillion yuan (US$144 billion) in revenue by 2020. [i]

Applications of AI have been exploding as the technology takes off. GE and IBM are building entire labs devoted to AI systems for better managing complex systems like health care, power grids, auto traffic and almost everything else. Google, Facebook, Microsoft and Amazon all use personal-assistance software to anticipate users’ needs.

Google’s self-driving cars use visual indicators, GPS and a range of sensors to create AI software systems. “We believe the utility of reducing auto deaths and idle time in traffic add up to a US$200+ billion opportunity in autonomous vehicle technology,” says Gene Munster. Venture capitalist Bill Gurley predicts that hundreds of companies will claim to have successful AI-guided self-driving cars over the next five years, but the vehicles will operate in controlled environments that do not reflect the real world.

After IBM’s AI system Watson famously beat human contestants in the TV show Jeopardy,Watson is being put to practical use. IBM, the Mayo Clinic and the Memorial Sloan Kettering Cancer Center are now training Watson to help doctors design “individualized, evidence-based treatment plans” for patients. Watson is being tested in business meetings both to answer simple requests for information and to help make complex business decisions.

Researchers at Imperial College London has created an AI program that taught itself to play chess by evaluating positions much as humans do, rather than using brute-force methods. After only 72 hours, it was able to match the best chess engines in the world.[ii]A computing system called AlphaGo developed by DeepMind defeated the reigning European champion player of Go and It later won a three-match series against world champion Ke Jie.

Science is integrating machine learning, vision, navigation, manipulation, planning and reasoning, and natural-language processing into a general AI framework. “Separate fields are mature enough to fulfill the grand dream of AI,” said one Stanford researcher. Ray Kurzweil, Google’s Director of Engineering and a well-known futurist, said, “The median view of AI practitioners today is that we are still several decades from achieving human-­level AI. I am more optimistic and put the date at 2029.” [iv]

Qualcomm has been manufacturing a neuromorphic computer chip that mimics the neural structures and processing methods found in the brain and now plans to use it in drones, cars, PCs, VR, and other devices. IBM is developing a chip  that simulate 10 billion neurons with 100 trillion connections. [v]

Vision systems based on deep learning can perceive the world much as a human. One program correctly identified hand drawings 75 percent of the time while humans scored only 73 percent. Georgia Tech graduates have created a neural network that recognizes daily activities in real-life images with about 83 percent accuracy. Google calls its new Google Lens “a search box for real life.” Point your smartphone’s camera at something, and Google will tell you about it, answering your questions before you ask them.[vi]

Facebook is using deep learning algorithms—AI methods that build abstract relationships based on lots of data—for facial recognition, targeted advertising, and designing AI applications, while keeping its code open for anyone to use. Machine Learning has been successfully used to read the mind using MRI scans.

Tufts researchers are trying to identify basic components of human morals and embed them into an AI. The effort could enable an AI to make complex ethical decisions that can override rigid instructions sets.

Researchers are developing deep learning systems that allow robots to figure things out for themselves—for example, detecting objects in video and recognizing how to grasp them. Todai Robot is an AI project that scored in the top 20 percent of students on the U of Tokyo entrance exam.

Elon Musk co-founded OpenAI to develop general purpose AI systems that outperform humans at most economically valuable work. He wants to make machines smarter than people. Scientists at MIT and Brown U. have given a robot the power of abstract reasoning, allowing it to follow instructions without being told what to do.[vii]

The Limits of AI

The development of a general-purpose AI comparable to human intelligence seems far off because it appears to depend on understanding the workings of our brain. “Machine learning is a painstaking, slow process of acquiring information through millions of examples. A machine improves itself, yes, but very, very slowly and in very specialized ways,” said Yoshua Bengio, professor at Université de Montréal, Canada. Nobel Laureate Herbert Simon predicted a computer would become chess champion of the world by 1967, three decades before IBM’s Deep Blue beat Garry Kasparov in a six-game match.

Stephen Hawking, Elon Musk, and many other famous authorities have been warning that AI could lead to a dangerous new arms race. An open letter with hundreds of signatories claims, “a global arms race is virtually inevitable, and the endpoint of this technological trajectory is obvious: autonomous weapons will become the Kalashnikovs of tomorrow.” “The thing I’m more worried about are things like manipulating people through smart advertising and the social impact, like people losing their jobs,” said Yoshua Bengio, professor at Université de Montréal, Canada.

As AI becomes more capable, it becomes increasingly difficult to figure out how it works. Programmers of advanced expert systems already have to make special provisions so users can figure out how the software arrived at its recommendation. We soon may find ourselves relying on AI systems that we simply cannot understand. In many complex tasks, machines cannot yet replace human skill and judgment. For example, an Air France airliner crashed in South America after the autonomous autopilot returned control to the human captain, who could no longer handle the situation.

Authorities are generally optimistic. The Artificial General Intelligence Conference estimates that AI is likely to arrive in the 2020s, and the leader of the OpenCog project said, “I am confident that we will have human-level AI by 2025.”

Gartner forecasts that 85 percent of customer interactions will be managed without a human by 2020. By the end of 2018, “customer digital assistants” will recognize customers by face and voice across channels and partners. [viii]

McKinsey is also optimistic, forecasting that  AI-powered applications will add US$13 trillion to the global economy over the coming decade, averaging roughly US$ 1 trillion each year.[x]

TechCast experts estimate that AI reached its take-off point of 15% adoption about 2018 and should reach mainstream in the mid 2020s when 30% of routine mental tasks are likely to be automated.  AI is forecast to create a global market of more than US$1 Trillion/year in 2030 and possibly much higher. Our experts feel relatively confident in this estimate. See the Life Cycle Graph to illustrate.

AI could free workers from non-intellectual tasks. White-collar professionals too will see a radical change in their labor market in the next decades. AI will relieve humans of tasks that are dangerous or boringly repetitive. In doing so, they will free us to pursue more satisfying careers.

Unlike fallible humans, AI systems never get tired or bored or frustrated enough to tell off customers on the tech support line, never let their attention wander, never pilfer from their employers or show up on Monday morning with a hangover. When AI replaces human workers, error rates often plummet while productivity soars; a factory in Dongguan, China, replaced 90 percent of its workers with robots and witnessed a 250-percent rise in productivity with 80 percent fewer defects. [xi]

It’s also possible, and perhaps more likely, that AI will benefit humanity in unexpected ways. “AI can be our friend,” Microsoft’s Bill Gates said. “AI is just the latest in technologies that allow us to produce a lot more goods and services with less labor. And overwhelmingly, over the last several hundred years, that has been great for society.” Gates noted, however, that society must figure out how to retrain workers and distribute benefits in a new economy. [xii]

That is exactly what McKinsey identified as the key to sustained growth of the “AI powered organization.” The challenge is to build robust AI systems that avoid the risks of alienating employees through job losses and stress, and also causing lost productivity. It’s also essential that good AI systems retain customers trust, privacy and patronage. This requires building AI with carefully defined data sets, ensure accuracy of the results, avoid human bias and ensure transparency and accountability.

In the end, McKinsey advocates applying the stakeholder model to involve employees, customers, suppliers, governments and other constituencies in design sound AI systems. They estimate that “Tech for better lives” systems will outperform traditional approaches by a factor of roughly two, or a 100 percent gain.[xiii]Coming from the top consulting firm in the world, this recommendation reinforces the move toward “stakeholder democracy” that TechCast and others like the Conference Board have advocated. 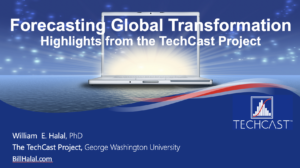 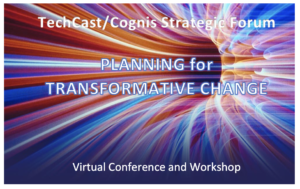 The First Strategic Forum – Planning for Transformative Change The pandemic and other threats like climate change pose an existential challenge to organizations everywhere, and